A sh*tload of online fun for two to four ADULT players, played on your mobile device, desktop, or laptop.

THE F%CKNG RULES
WORDSMUT is pretty much like your typical crossword game - you know, "Scrabble" and "Words With Friends" and the what-not. The object, of course, is to earn points by creating words which intersect with previous words until all the tiles are gone. The opening word has to have one letter on the center square (a Double Word score), the bonus squares are only good once, the player with the most points at the end wins, and the player who runs out of tiles first gets the total value of the remaining player’s (or players’ if three or four are playing) tiles added to his or her score, while the player or players left holding tiles subtract the value of their tiles from their own score.

A few minor and one MAJOR variation…we’ll start with the minor ones.

In WORDSMUT, each player begins with and maintains eight tiles (as opposed to the usual seven). Because of this, we’ve made using all eight tiles at once (a BOO-YA!), worth 75 points, rather than the 50 or 35 points of some other games.  You know who we’re talking about.  Some of the letter frequencies have also been changed up a bit.  You’ll understand why later.  Also, in addition to the two blank tiles (which can be used as any letter, but have no point value), we’ve also added ten symbol tiles - !, $, #, %, *  – which can also be used as any letter (and also with no point value). We’ll explain in detail how they’re used shortly, but we bet you’ve got a pretty good idea. All scores calculated by the app. Also, as there will be a dictionary and a special dictionary (hold on, hold on – it’s comin’ up) integrated into the game, Challenges will be unnecessary and, frankly, impossible.

Now, for the MAJOR variation.  And this is where the sh!t gets real…

Unlike the other word games, which either prohibit or rarely allow profanity, WORDSMUT actually encourages it.

You’re goddamned right we do.  In fact, it earns you double the TOTAL points for that word.

From “ASSBAG” to “ZEBRAFUCKER,” our Dictionary o’ Smut includes some of the most vile and dandy dirty words you could ever imagine, and some you probably couldn’t.  You know, like “Zebrafucker.” Bet you didn’t see that one coming.  Or at least imagined it’d be hyphenated.  In fact, there’s a whole slew of fish and reptiles and mammals and birds – like ”Catfish” and “Turtle” and “Ferret” and “Owl” - you can just slap down at the beginning of “Fucker” (or Fuckers or Fucking or Fucked), no hyphen required.  We added some extra Cs and Ks and Fs to the mix because of that word's fucking versatility.

Points double only for the curse word(s) formed. However, adding anything on to a curse word (even just an S), makes it another curse word.  Double the points. There are some fun examples a bit further down.

Now about those symbol tiles…

The !, @, #, %, and ? can only be used for a letter or letters in the smut, and not in words which ain’t necessarily dirty (like BITCH or DAMN or ASS or COCK - yer grandma says shit like that). They can, though, be used in the non-smutty part of a complete dirty word. See an example below as well.

WORDS YOU CAN’T USE
We’re pretty open-minded.  We’d have to be, with a word like “Zebrafucker” used in our Rules section three times already.  We don’t, however, promote intolerance. Therefore, racial epithets - or those aimed at sexual orientation - aren’t allowed.  Neither are those aimed at a particular religion.  So a word like, say, “assfucker” would be perfectly acceptable, whereas “nunfucker” would not.  See the difference?  We like dirty words that can offend everyone. Feel free to peruse our “Dictionary o’ Smut” to your heart’s content. A good way to commit the words to memory is to say them out loud, over and over, at work or church.

YET ANOTHER FUN FEATURE
Because WORDSMUT is meant to be both entertaining and educational, when you play a curse word, you’ll see a pop-up bubble with the word used in a clever sentence.

For instance…oh hell, let’s just go back to “Zebrafucker.”  Here’s what Players might read after adding “Zebra” to “Fucker” (or “Fucker” to “Zebra”):

“John lost his job at the zoo when it was discovered that he was a zebrafucker.”

You know, shit like that. Players can also submit their own sentences (or even their own cool profanities) through the app. Those will be updated regularly, with the approved contributions posted on our website.


Now how about some fun f#c*ing EXAMPLES?!
(including an example of how g#ddamned technologically challenged I am – using phone pics of a Scrabble board on the coffee table…pretend it’s the above Wordsmut board, on a fuc#!ng screen, ok?) 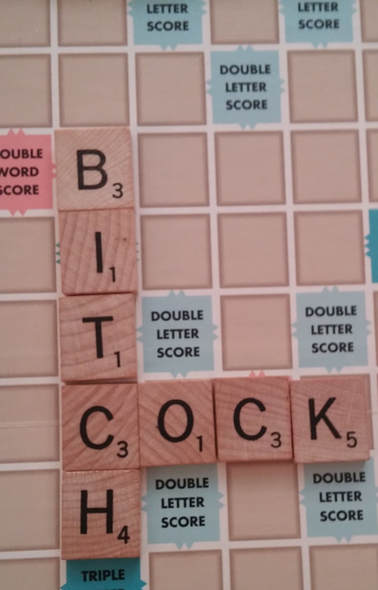 Neither of these gets the double points…not yet. Both words have alternate meanings acceptable in at least semi-polite conversation.

NOW we’re talkin’! Double points for EACH!!
POP-UP: “Get your BITCHLIPS off my beer!”
POP-UP: “That COCKSUCKER said my sister was ugly!” 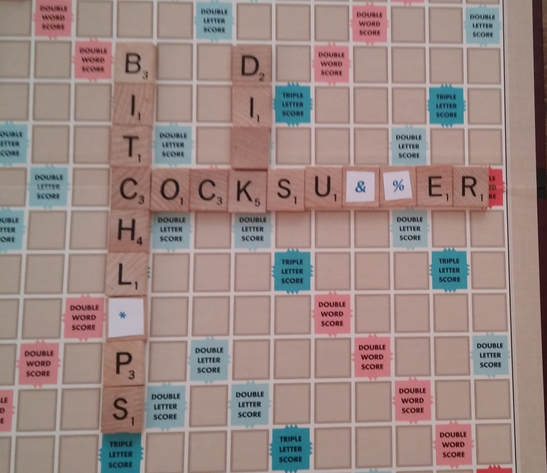 No double points for DICK, as it can also be a detective. Regular blank tile acceptable, symbol tiles not so much. 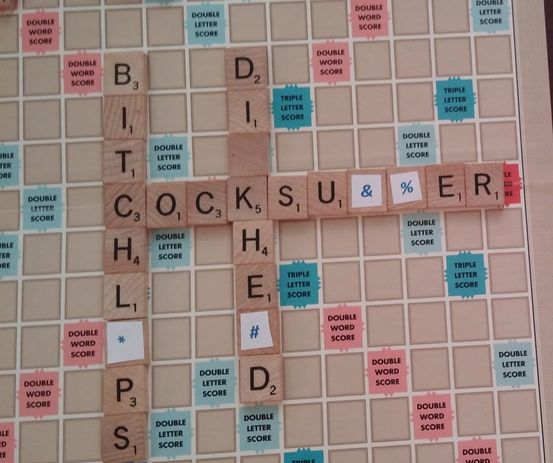 So even though HEAD’s not a dirty word, adding it to DICK makes the whole word dirty, so the symbol tile can be used.
POP-UP: “If just one more DICKHEAD gets in the Express Checkout with twenty-seven fucking items, we’re gonna throw down!”
HOWEVER.....

Let’s pretend, shall we, that DICKHEAD had been played as a single word, rather than just HEAD being added to DICK. In this case, the symbol tiles can be used in any part of the word.

Now let’s further pretend that SPOOGE (that’s a fun smutty word) has been added, making DICKHEAD plural. That’s double points for both words, baby!
POP-UP: “I’ve never seen a bigger bunch of DICKHEADS!”
POP-UP: “If you milk a bull rather than a cow, all you get for your trouble is a bucket of  SPOOGE (and a new friend)!
THAT’S PRETTY MUCH IT - NOW LET’S CUSS OUR ASSES OFF!!

NOTES AND THE WHAT-NOT:

I’d like to put a team together for this project (if you don’t think the entire idea daft). One idea I have is to get the design hammered out enough to create an animated video presentation for investors and/or a crowd-funding campaign. Which could be funny as HELL in its own right. We’d include a budget, including estimated costs for the creative labor involved, promotion, and other expenses. We’ll also work out a profit-sharing plan for anything above and beyond breaking even. I dream big. I've been accused of being delusional.

I simply believe there's an untapped market for this kind of thing. Lots of intelligent folks really enjoy cussin'. (Some studies show they have a greater proclivity toward it than the checkers/Candy Crush crowd...dang, that was mean).

I can compile the Dictionary o' Smut, and all the pop-up sentences (would like to start with about a half dozen for each dirty word)-although I'm sure many of you will have colorful input. (well, I don't know...just assuming that if you're interested in the project at all, you're likely profane).

That’s all I’ve got for now, I think…I welcome any comments or suggestions (and I appreciate the most brutal of constructive criticism, even if I cry a little on the inside), either through this site, by FB PM, or at tyhager@hotmail.com. Thanks!!