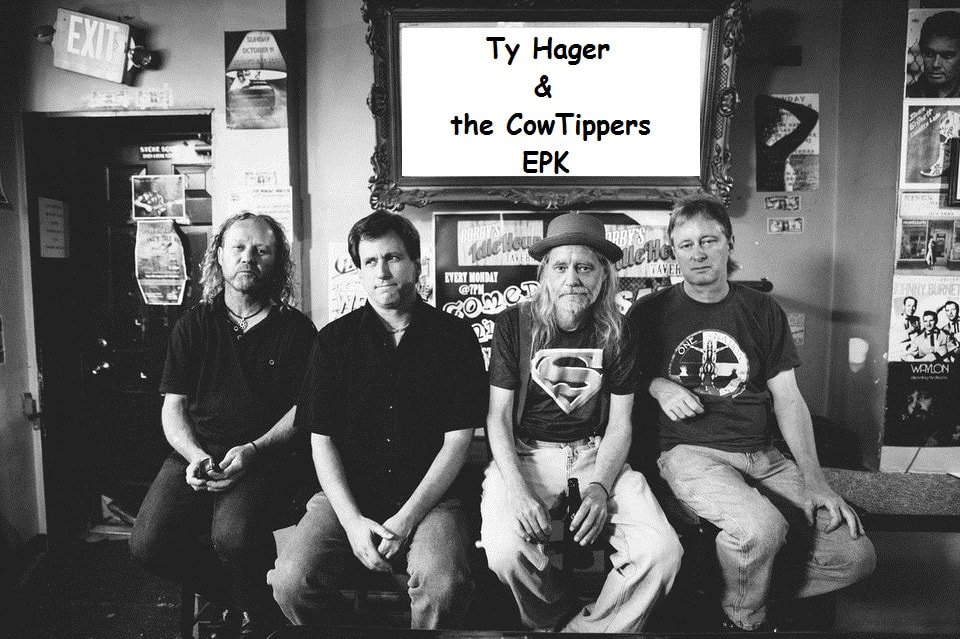 "Gloriously weird...Smart and funny,"  Peter Cooper, The Tennessean
"Side-splitting,"  the Nashville Rage
"Reminiscent of John Prine, Bob Dylan, Robert Earl Keen, and even Jimmy Buffet," Maryville Daily Times
Ty Hager & the CowTippers formed in an old farmhouse outside of Murfreesboro, TN in 1993. Hager, fresh from a stint as a homeless guy in Nashville, was given shelter from his multitude of storms by some Middle TN State University buddies, and proceeded to write 30 songs in his first 30 days there. Before long, Scott Carter, Chris Jackson, and Jeff Anderson - whose band, "Big Vessel," also rehearsed at the farm (Scott lived there too, Chris had only recently moved out) - started joining in, with the vocal harmonies of Scott (lead guitar) and Chris (bass) adding a fresh and amazingly cool dynamic to Ty's unique and often whimsical  compositions.

By 1994, they'd come up with a name for the band (no one really knows HOW it came about - there was lots of beer flowing in those days - but it was most likely inspired by...um...COWS), and were playing regularly in Murfreesboro, then in Nashville. They played sporadic gigs throughout the remainder of the '90's, put out a few self-produced recordings, and gained a respectable following, but not a lot of interest from Music Row. In 2001, Ty - frustrated by the Nashville music business - moved to Austin, TX, where he was signed in 2002 to New York-based Winthrop Records, which released two CD's of Ty's music (the first, "Funny Ha Ha, Funny Strange," includes a couple of 'Tippers tracks).

The band briefly re-united for the Nashville CD-release party for "Funny Ha Ha." in 2003, but had pretty much gone their separate ways. Ty moved back to Nashville in 2005, where he recorded his second Winthrop release, "Songs About Life and Girls (but mostly girls)," which was produced by Steve Goodie, whom Hager met in 1988 while doing stand-up comedy. Goodie had also produced and played various instruments on half the tracks of the first CD, and the two had collaborated on various musical and comedy projects over the years.
​
Hager opted out of his record deal in 2007, and by the next year quit music entirely, returning to his home state of Oklahoma, where he hosted morning radio shows, produced and hosted a show on the American Forces Radio Network, and wrote a novel. The music bug returned by 2014, however, and in the spring of 2016 he moved back to Nashville. Because if at first you don't succeed...

Hager had kept in touch with Carter and Jackson over the years, and immediately reached out to the pair to put the band back together. Goodie became the CowTippers' drummer in October of 2016 (not coincidentally, the same month Hager quit drinking), and Mike Adkins (a long-time friend from the farm days) joined in 2018, bringing full circle a quarter-century of musical mirth and brotherhood.

​​THE FELLERS IN THE BAND 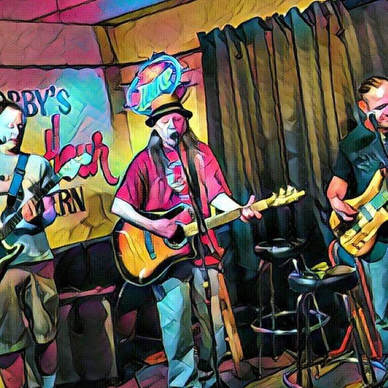 TY HAGER - RHYTHM GUITAR, LEAD WARBLER
Ty was born in southern California, but raised in neighboring Tulsa, Oklahoma. He moved to Nashville in 1982, and started playing guitar and writing songs "because that was the law at the time."

His full-length bio is HERE.

Use this space to doodle 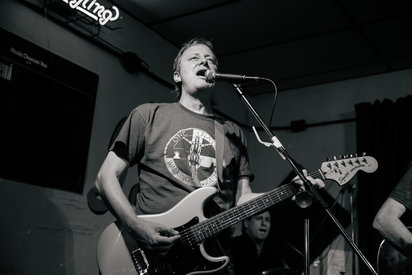 SCOTT CARTER - GUITAR HERO, HARMONY VOCALS
Scott's the master of the axe, playing tasty and freakin'-awesome lead and slide on both electric and acoustic guitars. He's the cool, laid-back CowTipper - he doesn't move much or say much, but his playing speaks volumes.

Originally from Louisville, KY, Scott's an audio/visual engineer by day, and also a songwriter, bass player (he played bass, then guitar, for the popular Goose Creek Symphony in the 90's), drummer, and awesome harmony vocalist.

He recently became a proud Grandpa, joining Ty in the Geriatric Wing of the band. 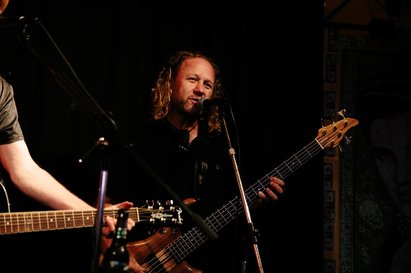 CHRIS JACKSON - BASS MASTER, HARMONY VOCALS
​The heart and dancin' shoes of the band, Chris brings his boundless energy and enthusiasm to every gig, all the while layin' down the solid bass lines and singin' the high harmonies.

Also a Louisville native, Chris has been a self-employed contractor and carpenter for over twenty years. Need a house built? Call Action Jackson! He's ALSO a singer/songwriter, and plays guitar and harmonica too. 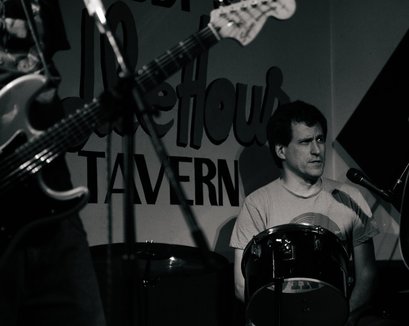 ​STEVE GOODIE - HARMONY VOCALS, LIKES TO BEAT ON SH*T
​Steve joined the CowTippers in 2016, although he and Ty have been pals for thirty years.

They've written and collaborated more times than you can shake a stick at, if you're prone to stick-shakin'.

Comedian, multi-instrumentalist, songwriter, producer and engineer (he's produced much of Ty's work over the years including all of his second Winthrops Records release), Steve owns Pitch Perfect Recording in Nashville, and has hosted the famous Bluebird Cafe's Sunday Writers Night for the past decade.

If you've listened to any syndicated comedy morning radio show in the country, there's a good chance you've heard Steve. His parody song D*ckheads was named the #1 song for 2016 on the legendary Dr. Demento Show! Steve's website is HERE. 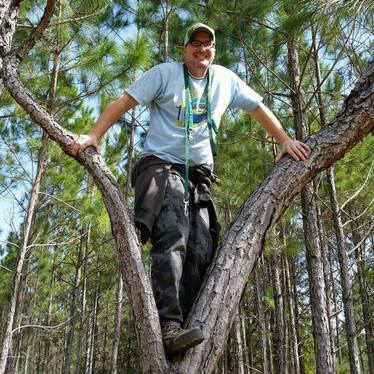 MIKE ADKINS
- GUITAR, HARMONY VOCALS
​Mike just joined the 'Tippers in 2018, but has been a friend of the band since the beginning - even playing a few gigs with 'em over the years! He also plays bass and drums, but rarely does any of that stuff while in a tree.
COWTIPPERS MUSIC AND VIDEOS
One of these days, the 'Tippers are going to release a damned band ​CD. In the meantime, please enjoy this video and CowTippers' tunes from Hager's anthology "Chronic Illogical."
COWTIPPERS SHOWS!
Now booking for 2018
​MORE PICTURES! 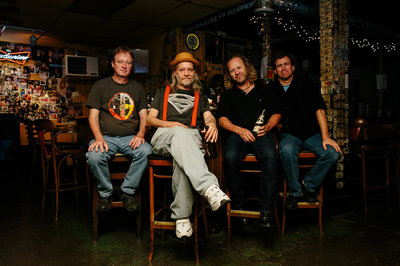 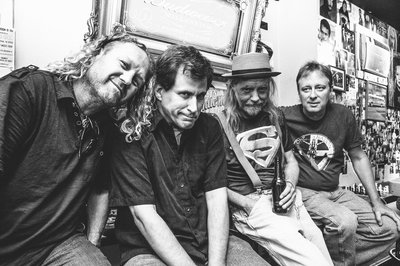 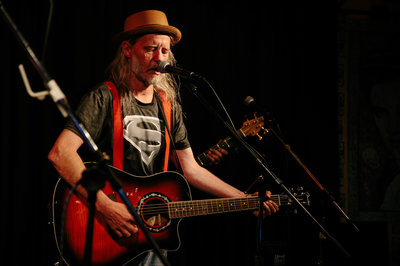 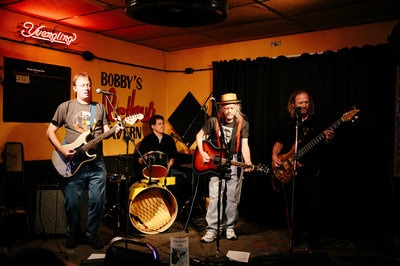 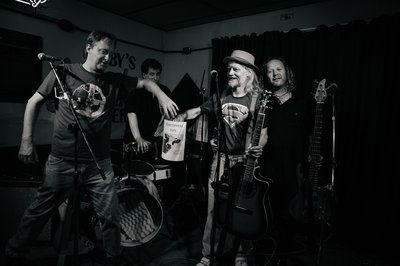