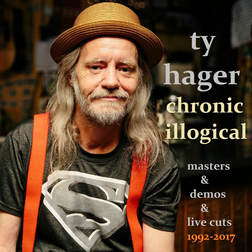 Tenacious Nashville Smart Aleck Releases 50-song Anthology
Sometimes it seems like Ty Hager just won't go away. The fifty-five year old Oklahoma native first began making the rounds at Nashville writers' shows in the early nineties, gaining notoriety not only for his "gloriously weird, smart, and funny" songs, but for his drunken rowdiness. "I was homeless, selling plasma twice a week for beer money, sleeping mostly in parking garages and parks," Hager reflects. "And always borrowing guitars and raising a ruckus."

In fact, his first release, 1994's "A Fairly Decent Tape, and It's Only Five Bucks," featured a stick-drawing Hager playing what was labeled a "Borrowed Guitar." The EP, recorded by long-time Hager collaborator and producer Steve Goodie and released on Goodie's Bartleby Records label, featured songs such as "Cat Dreams," in which Hager envisions the whole world as "a big rubber mouse," and "Pain," with a protagonist who - after multiple assaults and threats of violence from his girlfriend - is "startin' to think she don't love him anymore."
It was also in '94 that Hager, now living in a farmhouse outside Murfreesboro, Tennessee, formed the CowTippers, with Scott Carter, Chris Jackson, and Jeff Anderson. For the next seven years, the band played semi-regularly in Murfreesboro and Nashville, always bringing down the house, Hager almost always creating a disturbance. "There were mornings after some gigs where the first thing I'd ask Scott or Chris was how we did," he remembers.

When not doing shows with his band, Hager was pitching his music to labels. "I had some interest from a couple of indy labels, had an actual meeting with one," he says. "I showed up with a six-pack of tallboys and my Fender. They made me play an hour and a half, had everybody working there gathered in the conference room, laughing their a**es off," he continues. "Then they had a meeting, and decided they didn't know what they would do with me." To this day, Hager's not sure whether they were referring to his hard-to-define music or his alcoloholism. "Probably both," he concedes.
In 2001, Hager left Nashville for Austin, Texas (he'd hitchhiked there and been briefly homeless in '93), his departure in part motivated this time, he says, "by a big-a** Billy Gilman billboard right outside the window of Sub Stop," referring to the then-child country star as well as the legendary Music Row sandwich shop in which Hager worked on and off for a decade. "I felt like Billy Gilman epitomized everything that was wrong with country music," Hager says. "And knew I sure as hell didn't have what they were looking for."

Within a few months of moving to Austin, Hager had landed a gig managing a deli, assembled a band, and recorded "An Okie from Nashville in Texas," an EP produced by Jay Hudson (Robert Earl Keen, Hal Ketchum, Pat Green), and featuring stellar Austin musicians Rob Lifford, J Griffis Smith, Bob Sweet, and drummer Keith Zebroski (who has now spent over a decade playing for Miranda Lambert). Long-time Austin radio producer and promoter John Peyton (a regular at the deli Hager managed) heard the CD and got it to president of New York-based Winthrop Records Phil Kurnit, who thought Hager "a gem," and signed him to a deal.
2003's "Funny Ha Ha, Funny Strange" received stellar reviews and regular airplay on the then-new XM-Radio, and included the six Austin recordings, plus an additional seven tracks recorded primarily in Nashville, including two CowTippers tracks. Despite the airplay and good reviews, CD sales sputtered, and Hager went into alcohol rehab in Pasadena, California (for the third time), then moved briefly back to Oklahoma, returning to Nashville in 2005 after being informed that Winthrop was exercising its option to record a second CD.

"Songs About Life and Girls (but mostly girls)," was released in 2006 and featured Johnny Neel (the Alman Brothers) playing keyboards, as well as Nashville studio luminaries Jelly-Roll Johnson and Fats Kaplan. The Steve Goodie-produced release also sold poorly, however, and a frustrated Hager got out of his record deal to work on a comedy/musical trio with Goodie called "The Wizenheimerz." The group recorded a CD and played multiple dates, but Hager was growing disenchanted with the music business, and - in 2008 - he returned to Oklahoma.
Hager spent the next few years hosting morning radio, producing a syndicated radio show, and working at a call center. In 2012, he took an idea he'd had in Nashville in '96 and wrote "Diary of a Dead Guy," a novel about a murdered country singer channeling his memoirs through a redneck kid.  The novel was also well-received (chosen as a "Pick of the Month" by one independent-publishing website, who called it "a creative, unique, and entertaining tale that deserves five stars”), but Hager was again drawn to playing. He formed a band in Oklahoma, performed a handful of dates, and recorded a few times, then returned once again to Nashville in the spring of 2016. That summer, he reunited with Scott Carter and Chris Jackson for the first "CowTippers" gig in over a decade.

In October of 2016, Hager quit drinking (the third rehab a dozen years earlier had sobered him up "just over a hundred days"). Unlike previous attempts at sobriety, when he had abandoned his music, this time he resolved to "play through," and the CowTippers added Steve Goodie on drums and played regularly until the summer of 2017, when Hager was sidelined by major surgery. Also in 2017, Hager adapted his novel into "Dead Guy Opry," a full-length, country-comedy opera. That project is currently in development, with Sean Patrick McGraw (Nashville Star, Jimmy Kimmel Live) cast in the title role, and Nashville newcomer Anna Lynn Ferris playing the widow/accused murderer.
In early February of 2018, Hager - with the blessing of Phil Kurnit at Winthrop Records - compiled and released a fifty-song anthology, which includes the original tracks from the Winthrop CDs, plus an additional twenty-five recordings dating back to 1992. The collection, called "Chronic Illogical" (Hager's play on "chronological," as the tracks are in order by year of composition) is available for download only from CD Baby and through Hager's website.

The whole Anthology, 30 seconds at a Time! 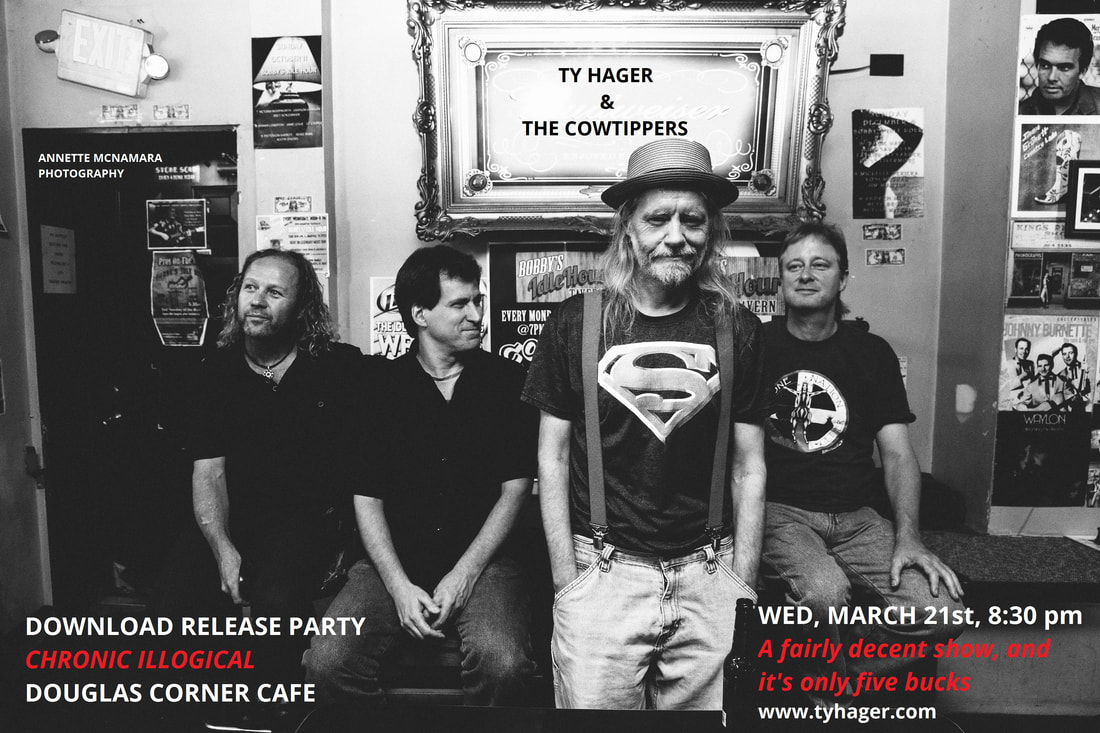 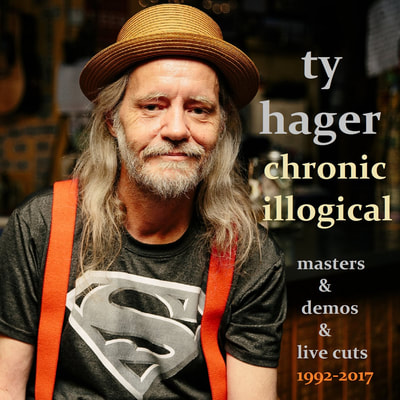 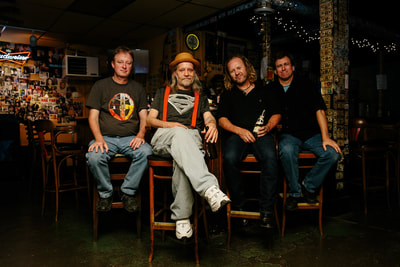 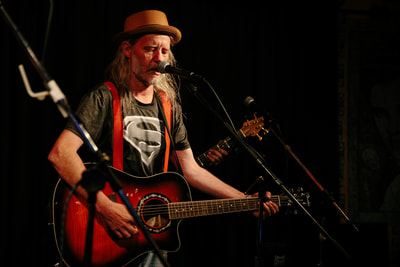 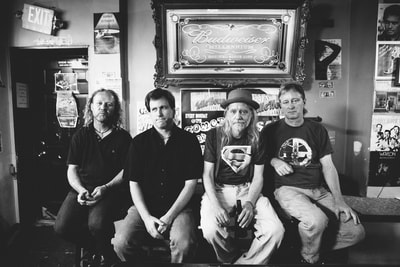 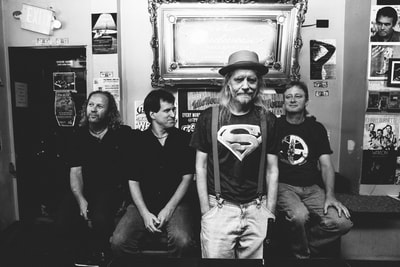 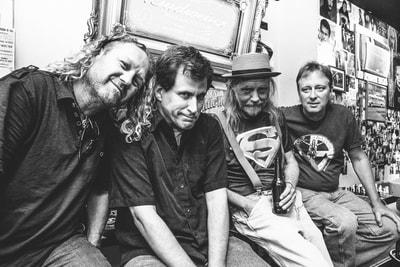